Tiaz has been spreading misinformation about me, hurting my credibility, so I’ve decided to write a page about everything that has happened between us. To make things clear I am not asking anyone to attack Tiaz. This page has been written for the sole reason of telling the truth and maybe will serve as a warning to some.

While reading this please consider this has been happening over long period of time so it was hard for me to notice the abuse, especially from someone who says they are my ‘friend’ or ‘brother’.

Let’s start where it all started. We’ve met on Tumblr somewhere back in 2017.

We talked through Tumblr and over time I taught him how to use Blender.

Then after some time it was clear that tumblr is going down so I made myself a website: likkezg.com. Tiaz wanted a website too, so I helped him set it up.

We even use the same hosting if anyone cares to check.

I’ll let the man speak himself:

After we released the preview shots of our movie and Tiaz gotten a couple Patreon supporters, he started using the assets I’ve created for the movie for his own personal gain and asking me to help him on top of that.

He started syncing his own personal animations to our 2b Horse movie project folder.

After a while the 2B horse project folder has become a complete mess, filled with all kinds of shit: Mercy, Tracer, etc models; his animations files, his animation renders. Basically, he has decided to use that folder as his own personal animations folder for some reason.

I was helping him with those anyway since he said he needs money and I was pretty easy to manipulate back then.

(Listed only animations during the 2B project. There were way more I helped him with afterward.)

Even though I’ve put a lot of work into polishing his personal animations he would still somehow forget to credit me every now and then.

Tiaz would also always ask me to reblog his animations.

This is me working on the project, while he is working on his own animations:

(Spoiler alert: he used it again.) 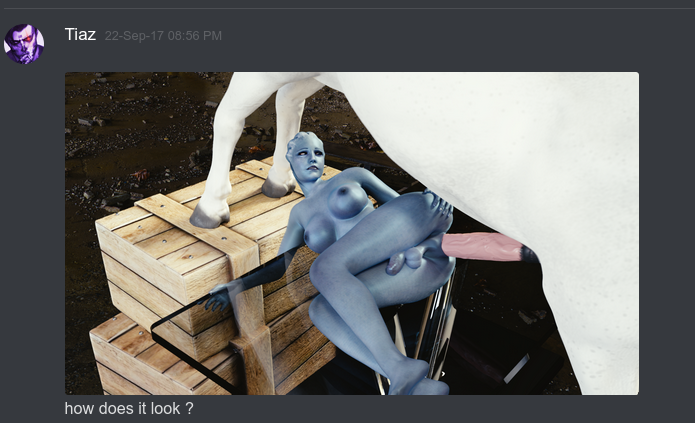 And then he used it again:

‘Dude can I just release our movie unfinished to get free money?’

He promised not to use our assets anymore on September 26th:

Obviously, this promise has been broken. There’s countless animations he released after September 26th using my map, 2B and horse models.

I didn’t really have much enthusiasm to work on the project anymore and constantly helping him with his animations totally ruined it, so I started working on my own stuff too at this point.

After this message pretty much nothing happened. Tiaz continued working on his own stuff. The project was over. We just gradually stopped talking about it.

As you guys know, the Journey game doesn’t have any music.

He actually didn’t even bother installing the software because he had to download it for the next project we were doing.

After around 2-3 years since the 2B project, while I was working on my game project, Tiaz has messaged me again. 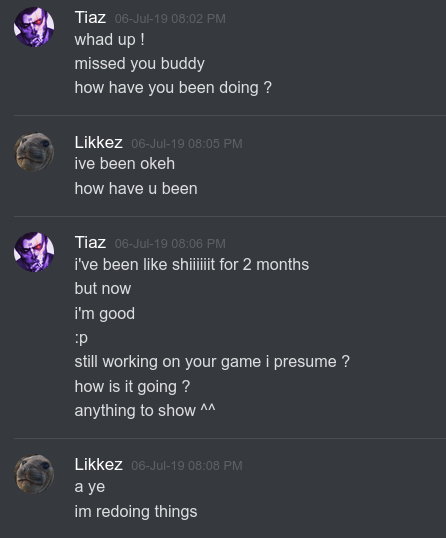 He has suggested he will help me with the sound and music for the project.

Later he also agreed he will help with animations

I agreed for him to join since I was working alone so far and I really can’t do any music myself. It sounded pretty good.

And, of course, as soon as he joins, he asks me to do something for him. I’ve decided to agree one last time because it seemed like easy money (he still haven’t payed me to this day.)

After that I was basically working on the models and the story. After I was done with the first drafts we decided to animate previs together.

Previs is basically a super rough animation only with key poses and timings used very early in production to see if everything works.

I made the first part of the previs in a couple days, showing Tiaz how to do it, and set everything up for Tiaz to continue it.

The gallery above shows Tiaz working on previs for 3 months.

And, on top of that, he promised not to start new animations but started a new one before finishing previs anyway.

Obviously, I wasn’t really happy with the giant delay on something that simple. However, we’ve decided to change up the story later so It didn’t really matter.

It didn’t go too well so we decided to start from a clean page.

Pay attention to the time on messages in the following gallery.

Tiaz has broken his promise yet again.

I took a couple days to think about it and I’ve decided it’s time for us to part ways. He has basically been an ideas man and has just been wasting my time.

Here’s the commit log on the project version manager as a proof:

So Tiaz decided to play the victim and blame it all on being sick from withdrawal. This isn’t the first time he’s done that. He’s had constant drug abuse problems over the years and he promised several times that he quit only to return back to doing drugs again.

So this brings us to today. Tiaz is trying to lie about the whole situation. And whenever I try to bring it up with him he just blocks me, unblocking me only to give threats and insults, then blocking again.

And it took him 5 months to release his newest animation.

Which is also just an asset flip.

And he’s threatening blackmail for me speaking out.

You guys make your own conclusions.

16 thoughts on “Why the 2B x Horse project never happened, the aftermath.”